Ai Weiwei is an artist and political activist from China. some of the mediums he works with are photography, sculpture, installation, and architecture.

In 2010, he did an installation in the Tate Turbine hall, filling it with 100 million porcelain sunflower seeds (http://www.tate.org.uk/whats-on/tate-modern/exhibition/unilever-series-ai-weiwei-sunflower-seeds) 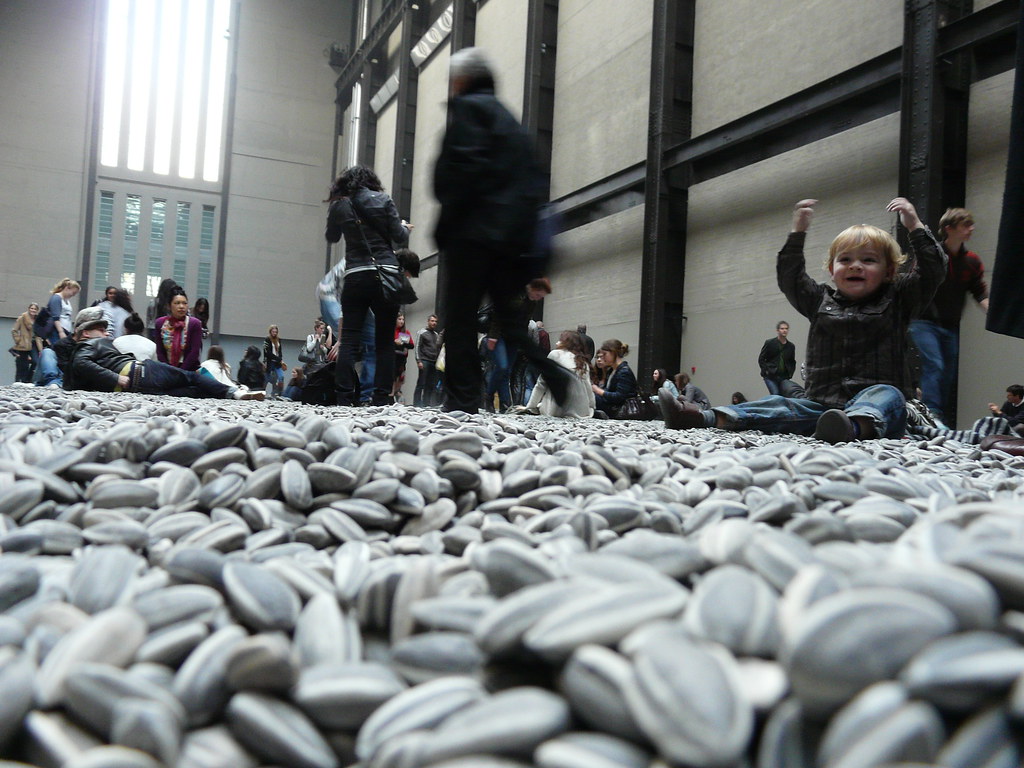 Under the harsh and propaganda-fueled rule of Mao Zedong, Weiwei viewed the act of sharing sunflower seeds with someone as one of compassion."Each ceramic seed was individually hand-sculpted and hand-painted by specialists working in small-scale workshops. This combination of mass production and traditional craftsmanship invites us to look more closely at the ‘Made in China’ phenomenon and the geopolitics of cultural and economic exchange today." (http://www.tate.org.uk/whats-on/tate-modern/exhibition/unilever-series-ai-weiwei/interpretation-text)

"I think reality is constantly changing, but the evidence is always there. Once you take a photo it becomes another reality and it stays there. At the right moment, some photos completely change history. Some moments just embody the force of change. Not every photo has that power, but still, to tell the truth- no matter whether it's a big truth or small truth- is always justified."

Ai Weiwei: Not at Blenheim Palace pt. 1 (from NOWNESS)

Ai Weiwei: Not at Blenheim Palace pt. 2 (from NOWNESS)

Kate Moross is an english art director, illustrator,collaborator, and director. Her work tends to include lots of bright colours, playful shapes, and elements of typography that she translates over many different mediums. a lot of Moross' work tends to be quite bright, some of her work features simple ink illustrations, like these.

Christopher Kane, a former Central Saint Martins student, launched his brand in 2006, going on to become one of the biggest british award-winning fashion designers.

Eatocks's work tends to have a sense of humour to it and a flavouring toward more work in a series or with an element of collection.

In Dutch, "droog" means "dry." It's an apt epithet for Amsterdam's hyper-wry design collective, renowned for its witty yet eminently practical products. Droog's most famous piece is perhaps the "Knotted Chair", an early creation from Marcel Wanders, now one of the world's foremost design superstars. But the collective's most recent partnership is with the off-kilter studio Atelier Bow-Wow on the Home at Droog project, a forthcoming members club and boutique hotel in Amsterdam. "Atelier Bow-Wow are used to working with smaller, intimate spaces and have a humble approach to architecture, so they had a good perspective for this," explains Droog's project manager, Machiel Brautigam. Expected to open at the end of 2011, the hotel will be joined to the Droog store by a courtyard, while a gallery will house the larger design installations that the collective undertakes. Although no interior commissions have yet been made to sit alongside iconic Droog pieces, work from a new set of artists is planned. "We want to look to the future," says Brautigam. "We are aiming for it to be a creative hotspot where lots of cross-fertilization will happen with like-minded people."'

[Noun]: Any of the pieces of hard whitish tissue making up the skeleton in humans and other vertebrates A lot of the designer's work is inspired by and features skeletons, especially skulls and bones. Besides his very famous diamond skull piece, Damien Hirst created his 'Gone But Not Forgotten' (2014) piece, featuring a gilded wooly mammoth skeleton housed in a glass and steel box, which sold for 11 million euros at the 2014 charity Cinema Against Aids event in 2014.

[MASS NOUN]:A soft white fibrous substance which surrounds the seeds of the cotton plant and is made into textile fibre and thread for sewing

"This is a tremendously mutable fibre that can be spun, woven and finished to produce a myriad of weights, textures and prices, suitable for buyers of any rank and attractive to virtually all communities." (Beverly Lemire's Cotton)

In 2006, the artist created a world map cut out of layers of cotton.

(From 'Cotton Worldwide' by Christina Kleineidam and Hans Peter Jost)

Feathers are a large element of MccGwire's pieces, which are usually sculptural and feature organic forms.

The artist did a series of child and toddler-like forms, covered in feathers.

"The suite "Feather Child" originates from Glendinning?s fascination with visions of a future society. The feathered children are embodied questions, where the artist is asking us if we, in a world where our genetics could be freely manipulated, will be able to resist altering our physical abilities. Will necessity or vanity be the ruling power? Will we act collectively or as individuals? The fragility of the feathers is simultaneously mirroring the perhaps most classic tale of human hubris: the fate of Icarus in Greek mythology. How far can humanity progress before everything falls apart?" - (http://www.lucyglendinning.com/about/index.html)

For a charity event at Central St. Martins for art schools, the milliner, Stephen Jones, created and donated a grey goose bottle covered in grey feathers.

Feathers are a frequently used material in the fashion house's designs.

[MASS NOUN]: Ornamental needlework in which pieces of fabric are sewn or stuck on to a larger piece to form a picture or pattern

Some Appliqué can have an element of embroidery to it or sense of experimentation with layering and combining different fabrics.

Quilting is a very popular form of appliqué. 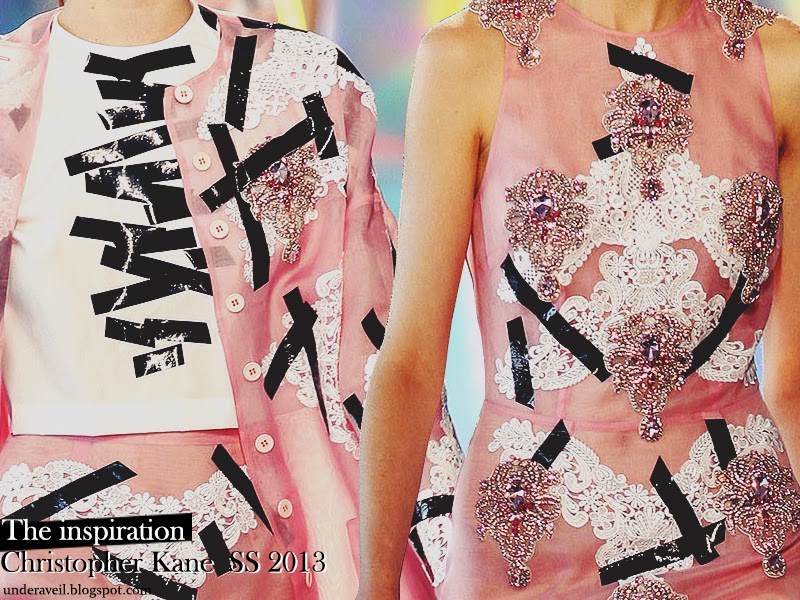 [MASS NOUN]: An even distribution of weight enabling someone or something to remain upright and steady

By using a system of magnets, Tonski was able to balance a 170 year old victorian couch on one leg. 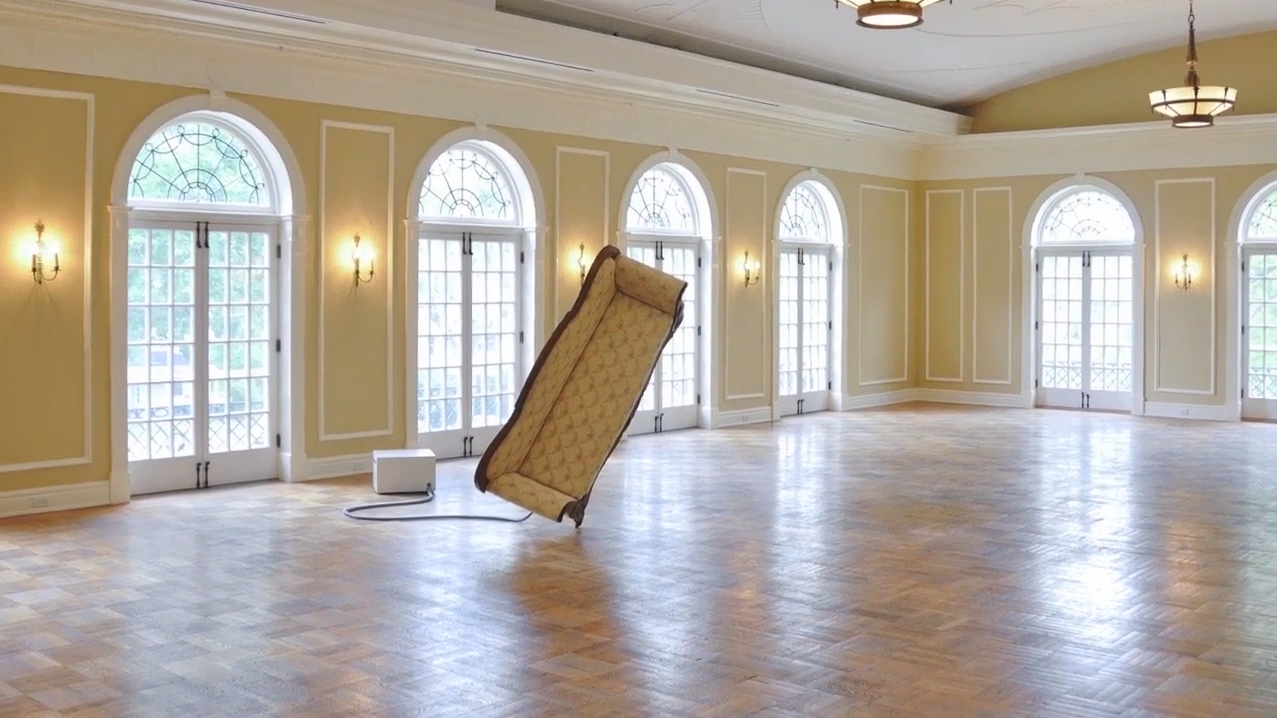 Much of the ceramicist's work embodies a sense of balance that is visible in the pieces.

Jacob Tonski: Balance From Within 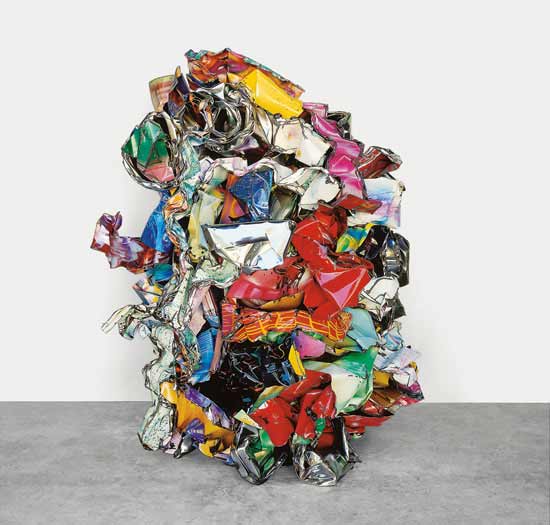 In 2006, Banksy created a telephone box that appears to be bent and broken, which he put on a soho street briefly.

Skreber's works use many crushed cars and pieces that resemble a car wreck.

Many of Miyake's designs have a crumpled or crushed quality to them.

"He patented the technique in the following year as Pleats Please, a source of crushed, ripply metallic knits displayed on kinetic mannequins."

Verb [WITH OBJECT]: Make an opening, incision, or wound in (something) with a sharp-edged tool or object

The artists cut perfect cubes (2,5 x 2,5 x 2,5 cm) of unprocessed foods for a photograph for a Dutch newspaper, De Volkskrant.

In 1967, Ono's "Half a Room" piece appears to be a whitewashed room, but it features partial and cut furniture.

Some of Hirst's well-known formaldehyde animal pieces feature animals that have been cut perfectly down their centre to be displayed in parallel glass cases next to each other.

"Weiwei used ancient Chinese woodworking techniques to join pillars from Qing dynasty temples and then carved the shape of China out of the middle.  It?s a statement on how China is a nation forged from many cultures and peoples."

Weiwei did a few pieces of tables and desks, cut and reattached, with missing legs, and some cut and folded so two legs rest up against a wall.

Woodcut,A popular printmaking technique, involves using a piece of carved wood as a stamp to create a print.

Pop-ups involve a form of cutting and using a system of connected pieces of cut card or paper to create a three dimensional image between two opened sheets.

(From 'Paper Engineering for Designers: Pop-up Skills and Techniques')