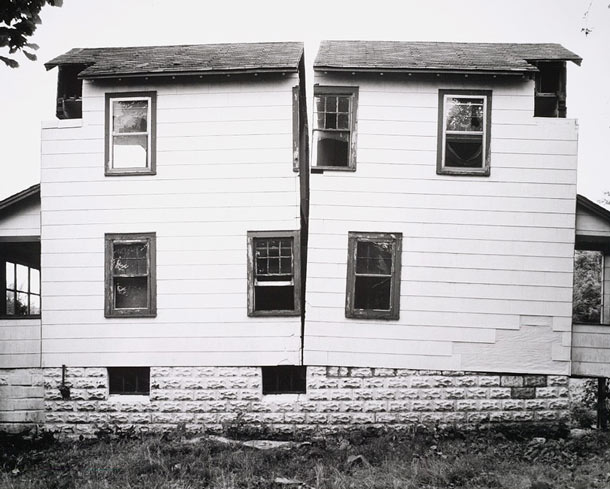 " Matta-Clark understood the psychic power of buildings over people. In one notebook from 1976, he wrote that he wanted to ?convert a place into a state of mind?. [8] This bond between home and occupant was articulated in the correspondence that Matta-Clark received after Splitting was opened for viewing. A number of letters complained about what he had done, saying that he had violated the sanctity and dignity of abandoned buildings; one even likened it to rape. [9]"

Having enlisted the knowledge and help of the German-born artist Manfred Hecht, Matta-Clark jacked up one end of the frame, including one of the porches, removed a layer of cinder blocks, and cut through the entire side of the building ? inside and out ? with a chainsaw. Gradually he lowered the back of the building onto the remaining blocks, leaving a gap in the cut of about two-thirds of a metre at the top that tapered to a slit at the base. [3] He called this work Splitting, and part of the filmed record features Matta-Clark stripped to the waist, at different times pulling hard on the jacks, up a ladder directing the saw and manipulating the cuts; he appears to be as engrossed in his work as Jackson Pollock in the films that show him dripping paint onto canvas, or indeed Trisha Brown in films of dance performances in which she scales buildings and creates improvised urban encounters. All show the artists? physical and mental engagement with their work and are performances of a type. When writing about Splitting, Matta-Clark also gave the house its performative role, saying that having made the cut there was a real moment of suspense about how the house would react, but that it responded ?like a perfect dance partner?.